Honey makers are secretly “watering” down their honey with cheap syrups that have been impossible to detect until now. 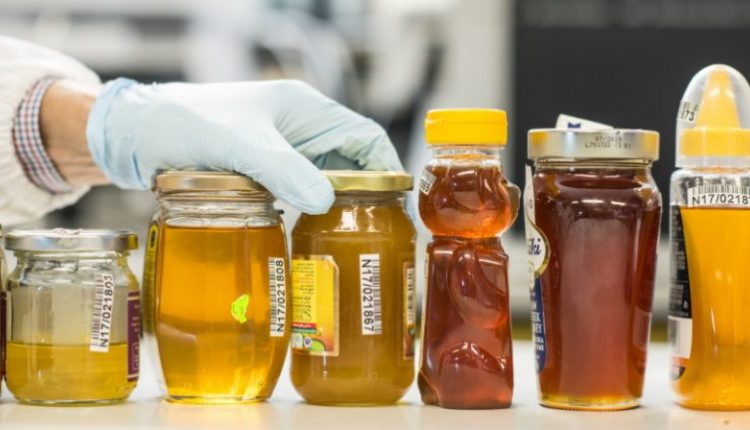 ew testing method has revealed nearly half of the honey sold in Australia, one of the world’s largest exporters of honey, is diluted with cheap sweeteners like rice syrup, wheat syrup and sugar beet syrup.

12 out of 28 honey samples taken from grocery stores around the country and tested in a reputable lab in Germany turned out to be mostly some form of cheap sugar syrup, not honey.

The scary thing is, all of these honey brands had passed the official government purity tests.

That’s because honey manufacturers have become more skilled at flying under the testing radar, researchers explain.

The official, internationally accepted, tests only pick up honey adulterated with cane sugar and corn sugar.

Manufacturers have learned they cannot detect the difference between rice syrup, sugar beet syrup and honey.

While all 28 samples passed the official government C4 sugar test, only 14 passed the NMR tests.

“The C4 test picks up most fake honey, because most of the cheap sugar syrups used to make fake honey came from C4 plants, like corn and sugar cane,” explains University of Newcastle molecular nutritionist Emma Beckett.

“But newer substitutes, like rice, wheat, and beet syrups, come from C3 plants, and so won’t be picked up.”

QSI’s managing director Gudrun Beckh, who has been testing honey for almost 30 years, said NMR is the most comprehensive test for detecting adulteration.

“Fake honey always existed, but in the last years it’s a growing problem because of the people who adulterate using more and more sophisticated methods, so it’s more complicated to detect it,” she said.

A 2018 study found an additional 27 percent of other Australian honey brands had been watered down with cane sugar or corn syrup, using the traditional C4 testing method.

The contaminated brands were those that had foreign honey, typically from China, blended in with them, not 100% Australian honey.

While there is no standard or testing for honey purity in the United States, it is likely the problem is similar or worse here.

A 2011 lab analysis showed 76 percent of honey sold in the United States has no pollen in it, indicating it is probably sourced illegally from China, diluted with cheap sweeteners and contains illegal antibiotics.

“Elimination of all pollen can only be achieved by ultra-filtering and this filtration process does nothing but cost money and diminish the quality of the honey,” he said.

“In my judgment, it is pretty safe to assume that any ultra-filtered honey on store shelves is Chinese honey and it’s even safer to assume that it entered the country uninspected and in violation of federal law.”

“It’s no secret to anyone in the business that the only reason all the pollen is filtered out is to hide where it initially came from and the fact is that in almost all cases, that is China,” added beekeeper Richard Adee.

The FDA has sent a letter to industry stating that “the FDA does not consider ‘ultra-filtered’ honey to be honey,” agency press officer Tamara Ward told Food Safety News.

Perhaps a better way if ensuring honey is real is to buy raw, unfiltered honey.

One ounce of raw, unfiltered honey contains approximately 20 vitamins, 18 amino acids, 16 minerals, and a ton of antioxidants and phytonutrients. Raw honey is an antibacterial, antiviral, and antifungal substance. It is also highly nutritious. It contains significant amounts of B2, B3, B5, B6, C, magnesium, potassium, calcium, sodium chlorine, sulphur, and phosphate.